Botswana is an arid country, covering an area of 581 730 sq. kilometers. It comprises mostly of  sparsely grassed plains with scattering of hardy thorn trees and is essentially a basin of rock, filled and leveled with Kalahari sand, only broken by the breathtaking wonders of the Okavango Delta, the Makgadikgadi Pans and Tsodilo Hills.

The wetlands of the Okavango Delta soak away into the arid Kalahari Desert’s insatiable sands, making the Delta unique in the fact that it is the only major delta whose waters do not reach the ocean. 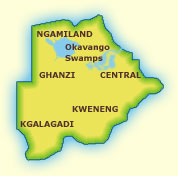 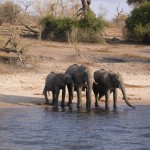 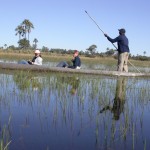 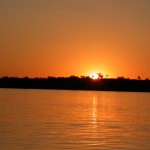 Sunset on the Chobe River

Established in 1968 and covering  11 700 square kilometre, this vast, dry and arid territory,  named after the Chobe River, encompasses a variety of diverse habitats which are home to the greatest concentration of game on the southern African subcontinent.

From the dense riverine forests and swamplands of Chobe and Linyanti, towards the eastern Nogatsaa region, the countryside changes first to mopane and mixed deciduous forests, and then to open grassy plains and rocky outcrops at Savuti in the southwest. Due to the seasonal availability of water across this vast terrain, Chobe is the site of a dramatic annual zebra migration. At this time the roads become almost impassable, congested with tens of thousands of animals forming a solid mass moving across the landscape.

Throughout the year herds of elephant and buffalo can be seen drinking along the river’s edge, their numbers swelling into the hundreds and sometimes thousands during the dry season.

The park has four distinct areas: the Chobe River frontage including Serondela; the central area around Nogatsaa and the associated pans, which attract great concentrations of wildlife long into the dry season; Linyanti with its riverine marshes and papyrus beds, and the Savuti area which includes the Mababe Depression.

As the world’s largest inland delta, the Okavango covers over 15 000 square kilometres of lush verdant wetland. This unique area contains an incredible 95% of all surface water in Botswana and is one of Africa’s prime tourist destinations. Surrounded by the parched Kalahari, this emerald jewel is an immense oasis fed by the flow of the mighty Okavango River which, unlike every other river in the world, never reaches the sea, but dies in the desert sands of northern Botswana.

The Delta is roughly cone-shaped and is about 175 km in length from the apex to its base near Maun. It has given rise to a teaming variety of life, sustained by a myriad of seasonally undulating waterways which provide an ideal environment for the plants and animals of the Okavango.

The Okavango Delta is Africa’s largest and most beautiful oasis – an isolated paradise and prime wildlife location. With it’s meandering, reed-fringed waterways and rich swamp land, the delta ranks amongst the finest of wetlands in the world.

The Moremi Game Reserve lies in the eastern section of the Okavango Delta and can confidently be described as one of the most beautiful and varied reserves in Africa, with an unprecedented concentration of wildlife.

The Moremi Game Reserve covers 4872 square kilometres and is only accessible by air or four-wheel drive vehicle; in the wet season many of the sand roads become impassable.  Much of the central and western side of the park is dense swampland.

Further places of interest are :